Noppera-Bou is the second episode of the Golden Kamuy anime.

Sugimoto and Asirpa head to Otaru, the largest town in the area, in search of the tattooed prisoners. They quickly find out that they're not the only ones after the treasure. The army is looking for it too! Sugimoto has to face off against a deadly sniper, and a horrible cold front is setting in too..

Seeing eaten pine cones, Asirpa realizes there are squirrels around and sets up traps, hoping to catch some for dinner. Sugimoto guesses that to not stand out the prisoners are staying in larger towns in Hokkaido and they visit one of the four larger ones, Otaru.

In Otaru, Sugimoto goes to a public bath, asking a regular if he has seen people with tattoos resembling straight lines, but the man states he have not. Going out of the bath, the man realizes Sugimoto was a soldier and thanks him for his service. Elsewhere, Asirpa asks other people if they have seen someone with those tattoo patterns, but with no luck. A shop owner comes out, annoyed by Asirpa's presence. He picks Asirpa up, threatening to sell her somewhere. Asirpa punches him in the eye and escapes. Sugimoto then shows up and hits the man, asking him if he has seen the tattoo. The man denies, but says someone asked him the same question before. As Sugimoto and Asirpa keep asking around, they realize a man is following them and lead him into the forest. Impatient, the man decides to kill them, but ends up getting caught in one of Asirpa's traps, revealing a tattoo on his body.

Sugimoto and Asirpa recognize the man is one of the prisoners. When the man wakes up, Sugimoto asks him where the other prisoners are. However the man doesn't know, explaining that after their escape others started killing each other, so he decided to run for his life. Sugimoto explains that the tattoos are useful only if they're gathered together, with the escaped prisoners all skinned. Sugimoto then points his gun at the man, but Asirpa stops him and says he promised not to kill the man. Sugimoto backs of, saying he only intended to scare him into talking.

Sugimoto and Asirpa tie the man up, and Asirpa proceeds drawing his tattoo on paper. She asks him what kind of person made the tattoos, and the man explains it is Noppera-Bou, a man without face. In that moment someone shoots the man in the head, and Sugimoto quickly ducks with Asirpa. Sugimoto provides cover fire while Asirpa makes smoke screen. Unable to see from his shooting spot, the sniper gets closer and his weapon gets caught in one of Asirpa's traps. Sugimoto then engages him and realizes he is a soldier from the 7th Division. As they fight, Sugimoto manages to disarm him, ready to deal a final blow with his bayonet. Asirpa interrupts Sugimoto, once again asking him to spare his opponent. Distracted by Asirpa, Sugimoto gets blinded by the sniper, who then manages to escape from Sugimoto's grip. However, the soldier gets hit by Sugimoto's rifle, then falls from a cliff into the river. Sugimoto explains to Asirpa that he isn't a killer, but would kill before he gets killed. Later that day, Asirpa and Sugimoto catch some squirrels, then return to Asirpa's tent to rest. Asirpa prepares traditional Ainu dish, citatap. Some time later at night the sniper who fought Sugimoto, is found alive on the riverside by the 7th Division.

The next day, another man gets caught in Asirpa's traps. He appears to be one of the tattooed prisoners, so after Sugimoto ties the man up, Asirpa starts copying his tattoo. Asirpa sees a rabbit and urges Sugimoto to catch it, leaving the man on his own. To their dismay, the man turns out to be the legendary Escape King Yoshitake Shiraishi, who is known for his agility. Shiraishi manages to free himself using a hidden blade in his mouth. Sugimoto sees Shiraishi run and goes after him, but as the weather gets bad, they both fall from a cliff into the river. As they start to freeze, Sugimoto and Shiraishi try to find a way to make a fire. Sugimoto realizes he is out of gunpowder and decides to search for them in the water. He asks Shiraishi to help, but Shiraishi refuses to do so unless Sugimoto promises he won't kill him. Sugimoto agrees and Shiraishi spits a bullet, stating he keeps one in his stomach in case he needs to shoot a jail cell lock. They manage to start a fire and warm themselves. Shiraishi explains that there are 24 prisoners, but he doesn't know how many are still alive. Shiraishi says that the only person who might know about it is the prisoners' leader, Toshizou Hijikata, the former Vice Commander of Shinsengumi. Shiraishi tells Sugimoto that Noppera-Bou told the prisoners to go to Otaru. Sugimoto warns him that the 7th Division is also after the prisoners and it's better to give up on the gold.

Tokushirou Tsurumi is informed that Hyakunosuke Ogata is awake. The lieutenant decides to check on his soldier. 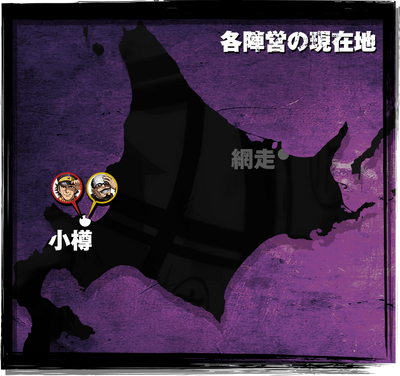 Retrieved from "https://goldenkamuy.fandom.com/wiki/Episode_2?oldid=9904"
Community content is available under CC-BY-SA unless otherwise noted.