Kamuy Mosir is the third episode of the Golden Kamuy anime.

While hunting for food, Sugimoto and Asirpa are seen and pursued by four 7th Division soldiers. Somewhere, Toshizou Hijikata is joining the hunt for gold and is looking forallies, while the first lieutenant of the 7th Division is gathering his men.

Asirpa prepares chitatap from a rabbit she caught earlier. Sugimoto ends up liking it more than the squirrels and decides to add some miso to make it even better. Asirpa mistakes miso for poop and refuses to eat it. The next day, the two look for more food and Asirpa notices a bear den, suggesting Sugimoto goes inside and kills the bear. She explains that there is a saying that a bear won't kill you in its lair. Asirpa tells Sugimoto there's something shining from the mountain, and Sugimoto realizes it's binoculars the soldiers are using. Asirpa and Sugimoto run away, with four 7th Division soldiers pursuing them.

Sugimoto decides it's better for them to split up. He gives Asirpa the copied tattoos and says to pretend she doesn't know anything and give up the tattoos to the soldiers if she is in danger. One of the soldiers, Genjirou Tanigaki, goes after Asirpa, while the other three go after Sugimoto. Following the footprints, Tanigaki realizes Asirpa was walking backwards in attempt to deceive him and sees her on top of a tree. He tells her to come down and Asirpa pretends she doesn't speak his language. She leaves the tattoos on the tree, but a squirrel pushes them and they fall on the ground. Seeing that, Tanigaki is shocked that a child has this and tells her to drop the bow, realizing that she can speak Japanese. Tanigaki aims his gun at Asirpa, but is interrupted when Retar suddenly attacks. Asirpa stops Retar before he kills Tanigaki.

The three soldiers catch up to Sugimoto. Their leader, Tamai, asks him why is he running and Sugimoto explains that he is hunting forbidden dear and hired an Ainu to help him. However, Noma recognizes Sugimoto as the "Immortal Sugimoto". He recalls that Hyakunosuke Ogata when found by the 7th division only managed to say one word , "Immortal". Realizing it's Sugimoto who attacked Ogata, the soldiers decide to shoot. Sugimoto runs and jumps in the bear den, escaping the soldiers. Tamai shoots in the lair, provoking the bear. The bear comes out from its den and rips Tamai's face off. Tamai's gun goes off, shooting and killing Okada. The bear then attacks Noma, who manages to stab the bear before getting torn to shreds. Tamai, on his last breath, shoots the bear multiple times and falls dead. Sugimoto comes out from the den with a bear cub, which is now ophrahaned. He decides to take it with him.

Sugimoto returns to Asirpa and Retar and sees Tanigaki on the ground, unconscious and with a broken leg. Asirpa lies that Tanigaki is dead, and says they should go, but suddenly notices the bear cub hiding in Sugimoto's clothes. Sugimoto promises to take care of it, but gives up under Asirpa's questions and says she can have it. However, Asirpa comments that the Ainu don't eat bear cubs, but raise them. Asirpa leads Sugimoto to her kotan, a village of Ainu people. Sugimoto meets her grandma from her mother's side, Huci, and they welcome Sugimoto to stay and eat. Sugimoto meets Osoma, and Asirpa explains some Ainu customs to him. Huci, who can only speak Ainu, says that Asirpa spends all of her time in the woods and is not skilled at traditionally feminine crafts. Asirpa disagrees, stating that she is a modern day Ainu girl. When Sugimoto asks about the bear cub being released in the wild, Asirpa explains that they don't release the bears. Instead they hold a ceremony, Iyomante, in which they send the animals off to the land of the gods.

Someplace else Tanigaki is tending to his broken leg, thinking of the wolf he fought earlier. He decides he wants to hunt the wolf, as his Matagi blood tells him to.

Tokushirou Tsurumi is looking for the soldiers he sent earlier. Captain Wada arrives, accompanied by Hajime Tsukishima. Wada is furious with Tsurumi and starts scolding him for losing four men. Suddenly Tsurumi bites Wada's finger off, blaming it on his erratic temper after the brain injury he received during the war. Shocked, Wada tells Tsukishima to shoot Tsurumi, but Tsukishima shoots Wada instead.

Toshizou Hijikata finds Tatsuma Ushiyama, one of the prisoners, and asks him to join forces, explaining a method of getting the code to Ainu gold without murdering the owners of tattoos. 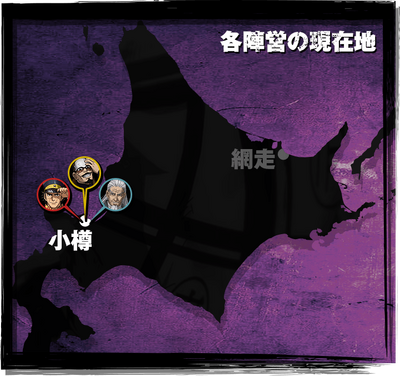 Retrieved from "https://goldenkamuy.fandom.com/wiki/Episode_3?oldid=9517"
Community content is available under CC-BY-SA unless otherwise noted.