Grim Reaper is the fourth episode of the Golden Kamuy anime series.

After spending time with Asirpa, Sugimoto realizes he grew fond of her. He decides it's better to leave for good and to not put Asirpa in danger while hunting for gold. Back in Otaru Sugimoto is captured by the 7th Division. Asirpa and Retar are looking for their runaway friend.

Catching some fish, Asirpa wants to clean them right away and asks Sugimoto to help. Sugimoto goes to get his dagger and takes a shortcut, but is stopped by Asirpa's uncle, Makanakkuru, who explains he was about to step into a deadly trap. As the two walk, Makanakkuru explains that the Ainu gold is cursed as its taken from the sacred rivers, which angered the goddess of water. Sugimoto and Asirpa later return to Huci, who places some of the food behind her head. Asirpa explains it's where the guardian spirit is and that each person has one. They prepare dinner and Sugimoto suggests he adds miso and offers some to Huci, much to Asirpa's anger.

The next day, the kids in the village ask Asirpa to play with them and use the kisarari, a "long-eared monster" stick that one waves in front of a window while making scary noises. Asirpa offers Sugimoto try, but then, seeing how bad he is at it, she scares the children herself. That night, when everyone falls asleep, Sugimoto and Makanakkuru hear a wolf howl. Sugimoto recounts seeing a white wolf that saved Asirpa, and Makanakkuru says it's Retar, a wolf Asirpa and her father saved as a puppy. After Asirpa's father passed away, Asirpa spent a lot of the time with Retar until the wolf left as it turned into an adult. Makanakkuru says that after that Asirpa stopped smiling, but now he notices her smiling again, linking it to Sugimoto's presence in her life. After Makanakkuru takes Osoma and leaves to their house, Huci asks Sugimoto to stay by Asirpa's side and take care of her. Sugimoto then realizes that it's better for him to leave and not put Asirpa and her family in danger by looking for tattooed convicts. He leaves the kotan without telling anyone. In the morning angered Asirpa is searching for Sugimoto. She calls for Retar and decides to look for Sugimoto in Otaru.

Back in Otaru Sugimoto confronts the shop owner they met before and asks him if anything strange happened in town. The man comments that a woman in a brothel was hurt by her client with strange tattoos. Sugimoto goes to a soba restaurant to meet the woman, but instead he is found by the 7th Division soldiers, Youhei and Kouhei Nikaidou. Sugimoto attacks them, but he is outnumbered and captured. Tokushirou Tsurumi shows up, stopping his soldier from murdering Sugimoto and takes him to the 7th Division headquarters in Otaru. Sugimoto attempts to play dumb and act like he doesn't know anything about the tattoos and Ainu gold. However, Tsurumi doesn't believe his story and tells Sugimoto he recognizes him as Sugimoto the Immortal. Tsurumi recounts finding one of his soldiers washed up on the riverbank, who later managed to write a single word with his hand, "Immortal", revealing the name of his attacker. Wondering why said soldier would ever engage Sugimoto in combat, Tsurumi concludes that Sugimoto must be looking for the Ainu gold and is gathering tattoos. Sugimoto asks the twins if their commander is crazy, to which Tsurumi jokes that a shell blew away a portion of his brain. They laugh, then suddenly Tsurumi stabs Sugimoto in the mouth with a dango stick. He then offers Sugimoto to join forces, as he explains that he is planning a military coup with the Ainu gold used for buying American weapons.

At night Asirpa and Retar arrive in town. Following the scent of Sugimoto's sock Asirpa gave him earlier, Retar finds a man sleeping in a house; the man turns out to be Yoshitake Shiraishi. Asirpa wonders why Retar would lead her here, and Shiraishi says Sugimoto and him accidentally switched socks after they both fell into freezing water. He then antagonizes Asirpa, asking if Sugimoto left her, then mentions a rumor about a man with a scar who got taken to 7th Divisions hideout. Asirpa demands Shiraishi takes her to the hideout, threatening him with a poisoned arrow. Shiraishi seemingly agrees at first, but suddenly attempts to run away. His escape is unsuccessful, as he is captured by Retar and is forced to help Asirpa.

The Nikaidou twins secretly visit Sugimoto. They want to check if he is truly Sugimoto the Immortal, intending to torture him into giving away the tattooed skins. Sugimoto quietly asks which one of them hit him before and promises to mark the twin, so that he can tell them apart. He then attacks the twins, knocking out Youhei's front tooth. Sugimoto fights, once again declaring himself Immortal. 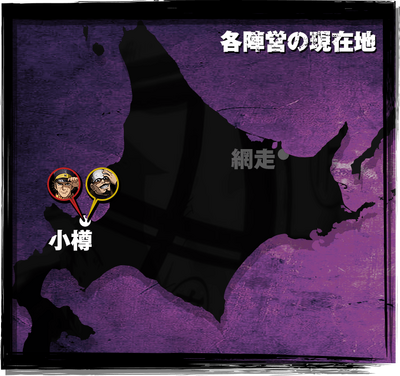 Retrieved from "https://goldenkamuy.fandom.com/wiki/Episode_4?oldid=9518"
Community content is available under CC-BY-SA unless otherwise noted.