Race is the fifth episode of the Golden Kamuy anime series.

Asirpa and Shiraishi try to rescue Sugimoto from the 7th Division. Toshizou Hijikata meets his old friend Shinpachi Nagakura and gathers his men to face Zenjirou Shibukawa. While hunting, Asirpa and Sugimoto come across the tracks of two men: Tanigaki and Tetsuzou Nihei, a famous bear hunter.

Shiraishi takes Asirpa to the 7th Division hideout. He says Sugimoto might be already dead, but Asirpa doesn't believe that, stating that Sugimoto's strength comes from his heart and not being afraid of death.

Soldiers come to the sound of Sugimoto fighting the Nikaidou twins and separate them, stopping the brawl. Tsurumi tells his men to keep the brothers away from Sugimoto. Shiraishi watches through a window as Sugimoto is getting tied up again, then reports to Asirpa that the man is alive. He offers Asirpa his help in exchange for the share of the Ainu gold. Having no interest in the gold, Asirpa agrees, telling him to split it with Sugimoto. Using the bear grease, Shiraishi sneaks into Sugimoto's cell and unties his bounds. He is interrupted by Nikaidou brothers returning, seeking revenge. Youhei tells Kouhei to watch outside, and Kouhei suggests his brother use a bayonet instead of a gun to not make noise. As Kouhei closes the door, Sugimoto jumps at Youhei armed with a bayonet, recognizing him by a missing tooth as the brother that hit him before.

Moments later Tsurumi arrives at the scene seeing Youhei dead and Sugimoto gravely injured. Sugimoto asks Tsurumi to save him in exchange for the tattoos. Hearing that Tsurumi orders his men to do their best to save Sugimoto and prepare a horse-drawn sled. As Sugimoto is carried by the sled, Tsurumi inspects Youhei's body. He finds it strange that Youhei held the blade with his injured arm; then he notices bloody fingerprints on Youhei's belt. Undoing it, Tsurumi realizes Sugimoto wasn't really injured and instead cut out Youhei's intestines to fake his wound. Tsurumi goes after the sled which Sugimoto has already taken over. As Tsurumi is aiming his gun at Sugimoto, Asirpa shoots Tsurumi's horse with an arrow, making the First Lieutenant fall down. Unwavered, he proceeds chasing Sugimoto and prepares to shoot, but decides to let Sugimoto go. Tsurumi returns to his horse, wondering what happened to it. Back at the 7th Division hideout Tsurumi sees it burning down. He concludes it's better to leave Sugimoto's group to gather the tattoos as they are better at it. When a soldier reports to Tsurumi that he couldn't save the tattoos in the fire, the First Lieutenant reveals he is wearing a shirt made of the tattooed skin and they're not in danger. Disguised as a 7th Division soldier, Shiraishi overhears the conversation.

Hijikata meets with Nagakura and takes some weapons from him. Ushiyama realizes this is Shinpachi Nagakura from Shinsengumi and wonders if the two are only after the gold or have some other goal.

After their successful escape, Asirpa, Sugimoto and Shiraishi reunite in the forest. Shiraishi suggests they eat the horse from the sled as it would stand out and bring too much attention. Asirpa agrees, saying she wants Retar to have a reward for his help. After shooting the horse, Shiraishi suggests they have sakura nabe and leaves to borrow some ingredients from villagers nearby. Sugimoto tells Asirpa that he didn't want her to die or get hurt as he couldn't face her family then. Asirpa explains that she made her decision and is aware of the risk. She says Sugimoto is the one that didn't trust her as a partner and got caught. When Shiraishi gets back, the group prepares a meal. As they're eating, Shiraishi mentions miso in the food. Hearing that, Asirpa is disgusted, but still tries to eat it. She ends up loving the taste and requests more miso.

Hijikata is gathering allies. After messengers Hijikata sent to Zenjirou Shibukawa, a prisoner he helped in Kabato Prison, didn't return, Hijikata takes his group towards the man's place. When they arrive, Shibukawa explains that the messengers told him everything about the gold. Shibukawa orders his men to kill Hijikata, but the Shinsengumi leader shoots him first. After the fight, Ushiyama wonders if Hijikata really intends on making a new Shinsengumi and doubts that others would be interested in the coup. Hijikata replies that there are people who have lived for many years in the lands of Hokkaido who would want it to be liberated.

The next day, Shiraishi goes into town to gather information. Sugimoto and Asirpa notice some deer tracks and decide to follow them. Asirpa tells an Ainu story of how there were more deer in the past as the gods gave it as food to humans. But due to heavy snow, the deer couldn't dig and find food and many died. As someone must had angered the gods, they stopped sending more deer to humans. A buck appears, and Sugimoto shoots it but misses the vitals. As the two are looking for the buck's traces, Asirpa sees footprints that must belong to two humans and a dog. She realizes that the 7th Division soldier who confronted her earlier is alive.

Meanwhile Tanigaki is with Tetsuzou Nihei and his dog Ryu. They hunt a bear and Nihei takes it out with a single bullet. Nihei wonders for how long Tanigaki will follow him as he didn't save him because he wanted a new lover. Tanigaki states he heard of the fearsome bear hunter Tetsuzou Nihei and then asks him about a white wolf hew saw before. 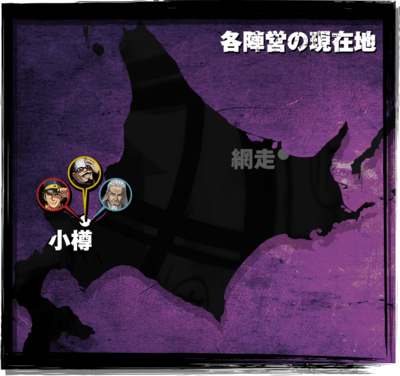 Retrieved from "https://goldenkamuy.fandom.com/wiki/Episode_5?oldid=9519"
Community content is available under CC-BY-SA unless otherwise noted.