Hunter's Soul is the sixth episode of the Golden Kamuy anime series.

Nihei and Tanigaki are hunting the last Hokkaido wolf, Retar. After learning of the legendary hunter, Asirpa, Sugimoto and Shiraishi try to save the wolf.

As Tetsuzou Nihei skins the bear he just killed, he explains to Tanigaki that this bear would have eventually attacked humans. Nehei says he has hunted 200 bears by himself, but each was different. Yet he has never hunted a wolf before, and he is excited to do that.

Asirpa and Sugimoto are chasing the deer Sugimoto shot earlier, but to Asirpa's surprise the deer still has stamina and manages to escape. Asirpa suggests they continue next morning and rest now. Sugimoto sees a nightmare of being back at the war and wakes up in a cold sweat. Meanwhile, somewhere in a hut in the forest Nihei and Tanigaki make dinner with the bear meat. Nihei wonders about Tanigaki's Matagi lifestyle, asking why is Tanigaki still wearing his army cap and doesn't go home. Tanigaki explains he had a reason to stay in the army, but now he can't neither return to his people nor the army. Nihei tells him to hunt the wolf and go home to being a Matagi. Tanigaki throws his army hat in the fire, and the two laugh.

In the morning Asirpa and Sugimoto continue their chase of the deer. At this very time Nihei decides they need to hunt a deer and use it as bait for the wolf. Nihei's dog Ryu is acting strange, and the hunter realizes the dog picked the wolf's smell and is afraid of entering its territory.

Asirpa and Sugimoto find the deer and Sugimoto is ready to shoot it. As the buck runs at him, Sugimoto catches himself in a moment of panic, seeing something familiar in the animal. Sugimoto misses, but the deer is caught by Retar, who appears unexpectedly. Asirpa asks Sugimoto why he hesitated. Sugimoto explains that he felt that the animal was just like himself, fighting for life despite all the odds. Asirpa cuts the deer open and tells Sugimoto to put his hands inside to warm them. She explains that the deer's life had a purpose and despite everything something lives on. While Asirpa is cutting the deer, Retar picks a smell and rushes Asirpa to leave. Asirpa realizes Tanigaki is nearby, so she urges Sugimoto to take what they can carry and go.

Nihei and Tanigaki overhear a gunshot and locate the source of the sound. Nihei notices the wolf tracks and Tanigaki sees human footprints, realizing it's Sugimoto and Asirpa. Nihei proposes they go wash their bodies, as the wolf can smell them. Asirpa and Sugimoto observe them from distance, and later return to a hut in the forest.

In the hut they find Shiraishi who brought some sake. They prepare the deer meat and spend the night drinking and eating. Shiraishi tells Sugimoto about one of the tattooed prisoners returning to Otaru, the legendary bear hunter Tetsuzou Nihei. Asirpa says she heard of him. She explains once there was a group of men that murdered hunters and took their prey. The men tried to kill Nihei, but instead were murdered themselves. Meanwhile, Nihei strips to wash himself and Tanigaki sees his tattoos, realizing he is one of the convicts. Nihei explains how he tracked his attackers down and killed them one by one. The last bandit got caught by the police, but that didn't stop Nihei from snapping the man's neck right in front of the policemen. Nihei was sent to Abashiri, but then escaped, as he wants to die in the wilderness. Shiraishi tells Asirpa and Sugimoto that in Otaru Nihei also inquired the shop keepers how much he would be paid for a white wolf pelt. Asirpa realizes that the hunters aren't after her and it's Retar who they want.

Nihei and Tanigaki spend the night watching the deer's body, expecting the wolf to come. However, in the morning they see wolf's feces on the deer carcass, and Nihei concludes the wolf did it while the men were bathing. Tanigaki recounts hearing about a wolf behaviour, a "watching wolf", and how the animal observes and follow humans. Nihei burns the wolf's feces, wanting to provoke the wolf. Later they prepare a trap for Retar, with Tanigaki acting to as bait and Nihei taking position to shoot the wolf. Nihei sees Retar and waits for him to fully reveal himself. All that time Sugimoto's group has been following Nihei. Asirpa sees that he is aiming at Retar and she shoots an arrow, warning the wolf and making Nihei miss. Retar escapes, and Sugimoto corners Nihei, telling him to surrender. Ryu attacks Sugimoto, giving Nihei a chance to fight back. As they fight, Sugimoto manages to chop the fingers of Nihei's left hand off. 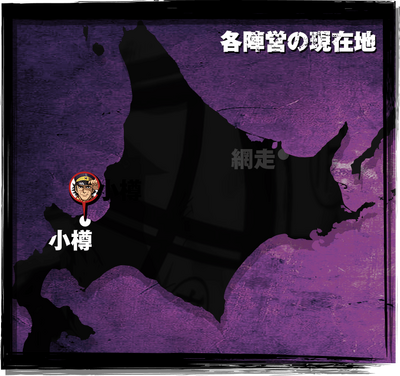 Retrieved from "https://goldenkamuy.fandom.com/wiki/Episode_6?oldid=9520"
Community content is available under CC-BY-SA unless otherwise noted.