Complication is the seventh episode of the Golden Kamuy anime series.

The deadly fight between the legendary hunter and the last Ezo wolf continues. Two prisoners meet under unexpected circumstances in Otaru…

Saichi Sugimoto and Tetsuzou Nihei keep fighting, while Yoshitake Shiraishi manages to get a hold of the gun and threaten Nihei to give up. Genjirou Tanigaki takes Asirpa as hostage, angering Sugimoto who stabs him in the hand. Nihei overpowers Sugimoto, and Sugimoto asks Shiraishi to lower his weapon. Sugimoto requests that they take Asirpa away, so she doesn't see what will happen and Nihei agrees. As Tanigaki and Asirpa lave, Nihei ties up Sugimoto and Shiraishi to a tree. Distracted, Nihei doesn't notice Sugimoto and Shiraishi slip away and realizes it too late — Shiraishi once again proves to be the Escape King.

Nihei warns Tanigaki that Sugimoto escaped. Tanigaki has taken Asirpa to a river where he walks past some toppled trees. Asirpa starts squirming and yelling, but Tanigaki already walks into a deer trap — an arrow hits him in the thigh. Asirpa explains there is poison in it, she asks to untie her so she can take the poisoned arrowhead out. Asirpa says the only way to save him is to cut out the flesh around the poisoned area. Tanigaki agrees, and Asirpa plunges her knife in his leg.

Some time later Nihei shows up, noticing that Tanigaki fell for an arrow trap. Nihei takes Asirpa with him and leaves, knowing that the girl can call the wolf. Asirpa argues that Retar is the last of his kind and that Nihei shouldn't kill him just for some coin. However, Nihei says he doesn't care about the money. The wolves are going extinct already, and there's no way to save the species; he simply wants to be the last hunter to see an Ezo wolf alive.

Nihei ties Asirpa to a tree, and moments later Retar is seen running at him. Nihei aims his gun, but Retar is evading his gun, moving in erratic directions. Nihei is amazed that the wolf knows how a gun works and is deliberately running to evade shots. Retar jumps and bites into Nihei's arm, but the man puts the barrel of his gun to the wolf's head, gleefully saying he won. This moment Nihei is bit in the neck by the second wolf; the wound turns out to be fatal. As Nihei sits down, Ryu shields him from the wolves and barks at them. Seeing the second wolf together with Retar, Nihei realizes they are mates. He jokingly comments that a woman doesn't respect the rules of a man's battle. Nihei dies satisfied. Sugimoto unties Asirpa, who then sees four wolf cubs, realizing Retar has a family. Barely holding up, Tanigaki walks up to Nihei to say his goodbyes — he recants an old Matagi saying, "May you be born again and hear pleasant sounds". Asirpa, Shiraishi, Tanigaki and Ryu go back to the Ainu village, while Sugimoto takes Nihei's tattoo.

Back in the kotan, the group enjoys a meal together. Asirpa teases Sugimoto, saying she hopes he doesn't put any more "poop" into the stew. He realizes she wants him to add miso to the food, but is being coy. As they eat the fish Huci brought, she recounts an Ainu story of how the fish stopped appearing as men started searching for gold. Eventually the Ainu decided to stop gathering gold and hid it. Shiraishi guesses it's the same gold they're after and that there must be more gold hidden than they have known of, which is 20 kan (75 kg). Tanigaki joins the conversation, saying Tsurumi is an intelligence officer, so he has gathered intel on the gold. Tsurumi believes there is 1000 times more gold than what Noppera-Bou told the prisoners, roughly being 20 000 kan (75 tons). Shiraishi wonders why Tsurumi would want to start a coup, and Sugimoto guesses that it must have been the Siege of Port Arthur. Tanigaki explains they were send in the battle of 203 Hill head front despite the chances of success being little. Tsurumi led his soldiers into battle and they won, but lost half of the men. Lieutenant general Koujirou Hanazawa, chief of staff who gave orders during the siege, took his life after he returned to Japan. However, the government blamed the division for the general's suicide. The 7th Division soldiers were denied their money and rewards and were treated like outcasts by the rest of the army. Tsurumi then decided to create a military dictatorship under his lead with the Ainu gold. Outside, Shiraishi asks if Sugimoto changed his mind about the gold after what he heard. Sugimoto replies that he won't let Tsurumi have the gold and will keep the promise to his partner.

Ushiyama is doing his daily judo training, but can't stop thinking of women. Hijikata decides they go in town, so Ushiyama can visit a prostitute. Hijikata explains to Nagakura that if Ushiyama hasn't slept wth a woman for some time, he becomes unstable and can go even after men. Shiraishi is also in town and decides to go to a more expensive brothel to "gather information". As he is about to enter the building, he runs into Ushiyama at the door. Shiraishi immediately runs away, terrified for his life. Ushiyama chases him, telling him he just wants to talk. As he can't shake him off, Shiraishi sees Nikaidou with some other soldiers from the 7th Division. He tells them that a man with strange tattoos is chasing him for allegedly stealing money at the baths. The soldiers realize Ushiyama is a tattooed prisoner and aim their guns at him. 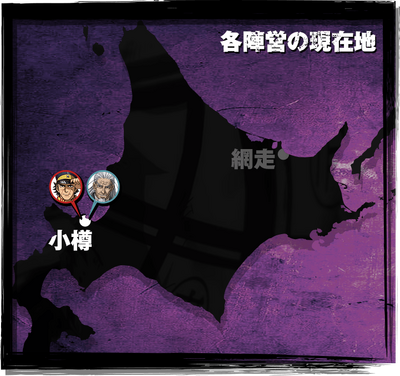 Retrieved from "https://goldenkamuy.fandom.com/wiki/Episode_7?oldid=9907"
Community content is available under CC-BY-SA unless otherwise noted.