Eyes of a Murderer

Eyes of a Murderer is the eighth episode of the Golden Kamuy anime series.

Shiraishi is chased all across the city by Ushiyama, and only escapes his predicament by getting the 7th Division involved. During the chaos, Hijikata's forces launch a raid on a local bank, blasting open a wall to get back his legendary sword. Asirpa, Sugimoto and Shiraishi are looking for a murderer from Abashiri Prison is killing fishermen at the coast.

Hijikata is seen talking to Nagakura on a cliff. He says that Noppera-Bou and him shared a goal, and so he is the only Abashiri convict to know the true amount of the gold hidden. Hijikata says that with that money he will be able to create a new nation.

In Otaru Ushiyama is fighting the 7th Division soldiers. Nikaidou manages to shoot him in the shoulder, but then Hijikata's reinforcements arrive. Nearby explosions are heard, as Hijikata walks by hostages in the building. Tsurumi arrives at the scene with Tsukishima and inspects a corpse of a man who was reported to be a tattooed prisoner. The man has no tattoos, and Tsurumi deduces that the shootout is a mere diversion from the real goal — robbing the bank.

In the bank Hijikata's men take money and jewelry, while Nagakura finds Hijikata's legendary katana, Izuminokami Kanesada. Tsurumi follows Hijikata to the bank, but he is too late: as he shoots Hijikata, the man escapes on a horse Tsurumi rode.

Shiraishi goes back to the brothel where he asked one of the ladies to take a piece of clothing from the tattooed man. Shiraishi obtains Ushiyama's sock and asks Asirpa to lend him Retar. Asirpa refuses, explaining Retar isn't hers to lend and she doesn't plan on getting close to him ever again, after seeing he had a family. Sugimoto and Asirpa catch a tanuki, but Shiraishi accidentally lets it escape. To the group's relief Ryu manages to catch the tanuki. Shiraishi then decides to use Ryu to locate Ushiyama. After searching streets of Otaru, Ryu manages to find Ushiyama's whereabouts.

Shiraishi is peeping into a window, overhearing Nagakura and Ushiyama talk about recent murders at Shakotan coast and an Abashiri convict, Kazuo Henmi — a serial killer who has killed more than hundred men. Ryu makes a noise, alerting Ushiyama, who then jumps out of the window and seizes Shiraishi. Their fight is interrupted by Hijikata, who prevents Ushiyama from murdering the Escape King. Later Ushiyama proposes they leave Shiraishi alive if he lets them copy his tattoo. Hijikata guesses that Shiraishi isn't working alone. Shiraishi explains that he is working with Sugimoto, but states they don't have any tattoos. Hijikata then tells Shiraishi to get the skin of Kazuo Henmi.

Shiraishi returns to Sugimoto and Asirpa and tells them about recent fisherman killings, and that the killer is Kazuo Henmi. He says it must be Henmi because all of the bodies had the "eye" character carved on them, the same character Henmi has on his tattoo. Shiraishi then recalls his meeting with Henmi. The man told him how he saw a wild boar eat his little brother alive; the traumatic event led to Henmi developing an obsession with killing. Worried about her uncle Makanakkuru, who is currently hunting a whale at the coast, Asirpa decides they catch the criminal and eat some whale as well.

They three go to the coast, where they are greeted by Makanakkuru, who asks them for help. One of the boats caught a whale, but it's been dragging them since yesterday. The group takes a boat and reach the fishermen, Makanakkuru then asks Sugimoto to hit the whale with a harpoon. The whale drags them between other boats, making a fisherman fall into the sea. Afraid the fisherman may die from hypothermia, Sugimoto suggests they go and help him. They cut their rope, leaving Shiraishi and the other boat to continue hunting the whale, while they go back and help the fisherman.

The fisherman turns out to be Henmi Kazuo, who has seen Shiraishi and guesses he and Sugimoto came to kill him. Warming himself by the fire, Henmi doesn't want to remove his clothes to not reveal his tattoos. He says he is too embarrassed to undress in front of others, so Sugimoto gives him a blanket. Henmi is amazed at how nice Sugimoto is, so he wonders if he really came to kill him. He notes that Sugimoto has a scent of a murderer, just like him, so he hopes that Sugimoto will brutally kill him just like the beast that killed his brother. Henmi goes back to the fishermen dorms and changes his clothes. He is excited about meeting Sugimoto and wants to learn more about him. Henmi realizes that he is not alone; a sick fisherman who saw him change clothes asks about his strange tattoos. Henmi strangles the fisherman with a string, but is interrupted by Sugimoto knocking on the window, asking if they could stay in the dorms and if there's work they could do.

Henmi shows Sugimoto and Asirpa around and explains the process of preserving herring. He then asks Sugimoto to cut a fish block with a big knife. As Sugimoto dives the knife in the block, Henmi gets aroused, imagining himself in the place of the block. Asirpa says they should leave and go find Shiraishi, and Sugimoto agrees. Not wanting them to leave, Henmi invites the two for a meal of white rice, to which they happily agree. After they eat, Asirpa goes to find a bathroom, leaving Henmi and Sugimoto alone. Henmi asks if Sugimoto was at Port Arthur and whether he killed people. Sugimoto confirms it, stating that he will never forget the faces of the men he killed and that his own death will not be peaceful. Hearing this arouses Henmi even more, convincing him he has to try and kill Sugimoto to finally meet the gruesome death he seeks. 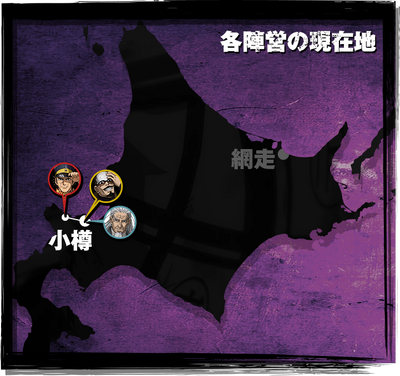 Retrieved from "https://goldenkamuy.fandom.com/wiki/Episode_8?oldid=10189"
Community content is available under CC-BY-SA unless otherwise noted.