Gleaming is the ninth episode of the Golden Kamuy anime series.

Sugimoto's crew follows rumors of a tattooed prisoner among the herring fishermen on the coast near Otaru. There they encounter Henmi, a strange, perverted serial killer. The fight between him and the gang develops into a deadly seaborne battle involving a killer whale!

Asirpa sees a dead body in the bathroom, realizing that Henmi should be nearby. She goes to warn Sugimoto, but he had left with Henmi, who wanted to show him something. Henmi shows him some tools they use to handle the fish, but Sugimoto is not interested. Sugimoto then sees 7th Division and Henmi realizes they also took his bait to come. Henmi decides to take Sugimoto to the boss' mansion as there are plenty of places to hide.

At the mansion, Tsurumi speaks with the boss, wanting him to invest in him and the boss is ready as he likes weapons. Meanwhile, Henmi and Sugimoto enter the mansion, but two soldiers see Sugimoto. Henmi kills one and stabs the other in the face, but the soldiers shoots and injured Henmi. Tsurumi hears the gunshots and faces Sugimoto, but as the boss start firing his gun, Sugimoto manages to escape with Henmi.

They head into the coast, where they see Shiraishi and his group had managed to kill the whale and drag him on the beach. Sugimoto tells him that the 7th Division is here, however Shiraishi sees Henmi and warns Sugimoto about him. As Sugimoto turns, Henmi is about to kill him, but Asirpa shoots him in the arm with an arrow. Henmi still attempts to attack Sugimoto, but he easily blocks his attack and stabs Henmi. Henmi gets excited and attacks Sugimoto again, but Sugimoto takes him down and stabs him again. As Henmi is happy and Sugimoto confirms he won't forget him, an orca comes out from the sea and drags Henmi to it. Sugimoto and the others jump on a boat and start chasing it. The orca starts throwing Henmi, trying to kill him. Being reminded of how his brother died from a beast, Henmi gets super excited to be able to die like this. Sugimoto sees a chance and jumps in to get Henmi. The orca then charges at them, but Asirpa pierce it with a spear with a rope and the orca starts pulling them, helping them escape Tsurumi. Tsurumi gets informed that Ogata had disappeared from the hospital and Nikaidou has been missing for days.

Back at Ainu's village, Tanigaki returns to see Ogata and Nikaidou with Huci. Tanigaki explains that he got hit by poison arrow and today is the first day he is able to walk without help. Ogata mentions that Tamai, Noma and Okada didn't return either and suggests that Tanigaki killed them, but Tanigaki denies it. Ogata comments he is joking and he will pretend he didn't see him and allow him to stay as much as he wants to repay the Ainu. Before leaving, Ogata asks Tanigaki if he had seen Sugimoto and that he works with an Ainu, but Tanigaki denies it. As they leave, Tanigaki tries to explain to Huci that he will be leaving, but Osoma disagrees and starts pulling him. As he pushes his head, a gunshot passes and scratches Tanigaki in the forehead. Nikaidou tells Ogata that he missed and that they should have killed him down there, however Ogata state he didn't want to kill the grandma too. Ogata explains that Tanigaki is a honest man and would never do something to betray Tsurumi, and he made it clear to Tamai. he guesses they may have failed to persuade him and tried to shut him, but he ended up killing them. Tanigaki recalls a talk with Tamai, who told him that there are people who plan on betraying Tsurumi and Tanigaki now believes Ogata is one of them.

While enjoying a meal and drinks, Hijikata approaches Sugimoto's group, acting like just an old man. He looks at Asirpa, commenting she has some russian in her and wonders about her japanese name, but Sugimoto doesn't know it. Before leaving, he secretly tells Shiraishi to make copies of the tattoos.

Tanigaki uses a smoke screen and Osoma gives him Nihei's rifle. He manages to escape the house, deciding to make Ogata regret missing him with his first shot. 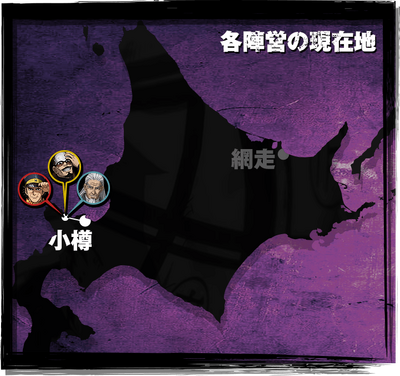 Retrieved from "https://goldenkamuy.fandom.com/wiki/Episode_9?oldid=10300"
Community content is available under CC-BY-SA unless otherwise noted.