Edit
watch 01:36
We're Getting Mutants in the MCU - The Loop
Do you like this video?
Play Sound

That's not hinna at all!

This article is a stub. You can help Golden Kamuy Wikia by expanding it.

Episode 2
Otaru (小樽, Otaru) is one of the most populated cities in Hokkaido, Japan.

In the latest days of Meiji era, Otaru has developed into a major port and become a financial hub known as "The Wall Street Of The North". Otaru was the largest commercial center in Hokkaido, but beyond the city limits lay untamed mountains and forests. There were Ainu settlements nearby, too.

At that time, Otaru was packed with brothels, many of which disguised themselves as "soba restaurants". The prevalence of brothels was so large that it was difficult to find a real soba restaurant.[1]

During their searches for tattooed prisoners, Sugimoto and Asirpa come to Otaru to ask passersby about strange tattoos. 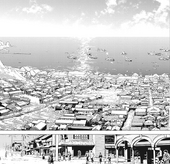